Several people have asked us when our cookbook will be available to buy. The answer is - the spring of 2009. We plan to have the manuscript to the publisher in the first month or two of next year. The editing, formating and printing process takes about a year. We have been gathering recipes and writing the book for several years now, so we are also very anxious to actually see the book on the shelves. If we have your email address, you will be one of the first to know when it is available. Our email address is: sami.scripter@gmail.com Please send us a message so we can notify you when it is ready.
Posted by Sami and Sheng at 8:17 PM 1 comment:

So many people in Saint Paul shared information with us to use in our book, it would be hard to list them all.

One special interchange happened early one morning at the Saint Paul bakery, Cakes by Fhoua. Sami watched and listened while baker, Fhoua Yang, shared her “story” and decorated beautiful made-to-order cakes. The following week, Fhoua and her business partner, Koa Yee Xiong, shared a marvelous recipe with Sami and Sheng. It consists of sponge cake, iced with coconut-laced whipped cream and topped with a little ball of fermented sticky rice. It is decorated with strings of caramelized sugar and soaked with sweet wine from the fermented rice. The dessert is a combination of an age-old recipe they learned from Koa Yee’s mom, Chia, and Fhoua’s recent Cordon Bleu Patisserie and Baking School training. The dessert represents the balance of modern and traditional elements of Fhoua and Kao Yee’s world. It will be included in the Desserts and Beverages chapter.

When Sami got home from Saint Paul she tried out the recipe and shared it with some of her Portland Hmong friends. Everyone who tried it voted a big “thumbs up” for the dessert.
Posted by Sami and Sheng at 10:48 AM 2 comments:

Wow - it has been an incredible two weeks. We traveled to St Paul/Minneapolis where we met Pieter Martin, our editor at the University of Minnesota Press.
We worked with a fabulous creative team that Pieter had mobilized to do the color photography for our book. It all happened at Cenveo, a business that deals in many aspects of advertising, packaging and images for publishers, companies and products of all kinds.

Here is a photograph of the crew in the test kitchen/photo studio. On the left is Terry Tolman. His title is “Creative Workflow Engineer.” He supervises the many photo shoots that happen in this department of Cenveo. Terry helped set up the shots and he was an all-around supportive guy. Pieter Martin stands to his right, in the green shirt. Next to Pieter is Chad Linderman, a chef who cooked and assisted the food stylist. Robin Lietz (wearing glasses) photographed each dish that was prepared. Sami and Sheng are to her right. Next to them is the food stylist, Lara. 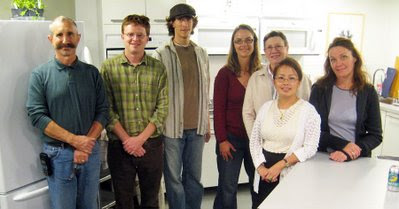 We were amazed at the amount of forethought and work that went into each shot. Prior to our arrival, after consulting with us, the team had decided which dishes would be photographed. They wanted to include a variety of dishes, including ones that are simple, complex, traditional, contemporary, entrees, deserts, condiments and beverages. They also decided upon a unifying color pallet and acquired tableware and table coverings that would best show off each dish.

On Sunday, we all spent the morning shopping at the International Market in St Paul, to purchase beautiful herbs and vegetables from Hmong vendors. Yuepheng and Shoua Xiong, the owners of the Hmong ABC Bookstore in St Paul loaned the Press several lovely pieces of Paj Ntaub to include in the shots.

It took four days to do the photography. Sheng, Sami and Chad chopped, mixed and cooked. Laura meticulously styled each dish. What a perfectionist! She considered the exact placement of each lime wedge and chili pepper. Robin spent hours photographing each dish. The degree of detail that goes in to getting the lighting, textures, colors and the placement of each element of a food photograph astounded us. Here is a photograph Sami took of Chad, Terry and Robin reviewing an image of papaya salad on the computer screen. 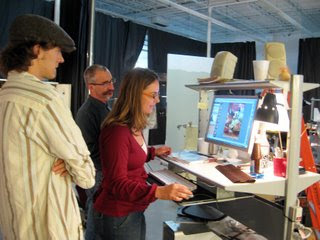 Because Sheng lives in Sacramento California and Sami in Portland Oregon we do much of our work on the book via email and don’t get to spend much time together. Well, that changed for the several days we spent in the Twin Cities. The pace was hectic, but we did have our moments of fun. 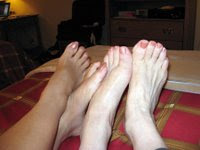 We'll write more later about some of the other wonderful people we met in St Paul while doing research for the book.
Posted by Sami and Sheng at 6:04 PM 1 comment:

Sami and Sheng
Sami, from Portland, and Sheng, from Sacramento, have been friends for almost 30 years.